Offical carrier of the Strong

FAQ: What is the difference between a Data Migration and a Data Integration? 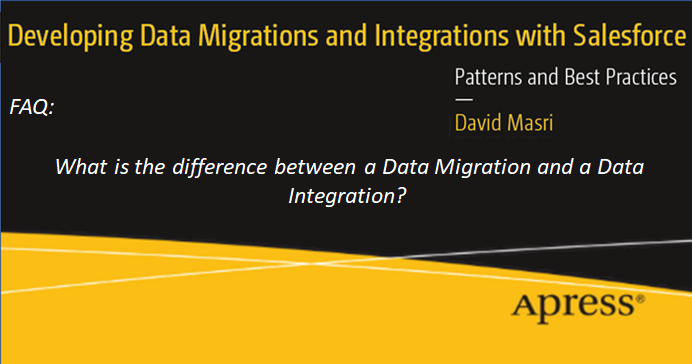 It's a surprisingly common question, I get asked it at least once a month: What is the difference between a Data Migration and a Data Integration?

From a strictly definitional perspective, a data migration is when we need to move data from one system (legacy or source) to another (target), where the target system will wholly replace the functionality of the source system. So, after the data is moved over and the new system goes live, there is no need to work in the legacy system any more (at least for the functionality that was migrated). So, this is a "onetime" data movement.

Data Integrations, from a strictly definitional perspective, is when we move data from one system (source) to another (target) on an ongoing basis, generally to reduce or eliminate all the problems that come from duplicate data entry. Note that this is different than an Application Integration where the goal is to share functionality.

One of my reasons for writing my book my book was to dispel the very prevalent thinking that somehow data migrations, because they are onetime, can be held to a lower coding standard than data integrations. And I stand by my position that treating data Migrations as a onetime data movement is the biggest mistake you can make when migrating data to Salesforce.

"Onetime" should be thought of as "onetime to production." And much like when building a rocket that will carry a robot to Mars one time, we need to keep to the highest of standards, and test our code thoroughly.


This article is adapted from my book: Developing Data Migrations and Integrations with Salesforce.

Have a question you would like to as see a part of my FAQ blog series? Email it to me: Dave@Gluon.Digital